A living symbol of Mexico’s ancient civilizations, the Xoloitzcuintli has an extensive history.

Archaeological evidence indicates that Xolos accompanied man on his first migrations across the Bering Straits. Archaeologists have discovered clay and ceramic statues of dogs nearly identical to the current-day Xolo in tombs of the Toltec, Aztec, Mayan, Zapoteca, and Colima peoples. The famous pottery dogs of Colima provide evidence of the intricate bond which has existed between man and Xolo for centuries. The Florentine Codex documented dogs as the chichi itzcuintle, the tehui, the talchichi, and the xoloitzcuintle.

According to Aztec legend, the Xolo came about when the god of death, Xolotl, created a dog from the Bone of Life. Xolotl gave the dog to Man and instructed him to guard it with his life. In exchange, the dog would guide Man through the underworld on the way to heaven. The word Xoloitzcuintli combines “Xolotl”, the Aztec god of the underworld, with “itzcuintli”, the Aztec word for dog. Xolos were sometimes sacrificed and buried with their masters in order to ensure that the dog would accompany the soul on its journey in the afterlife to Mictlán, the final resting place for the dead.

In Aztec tradition, Xolos were viewed as guardians, warding off both intruders and evil spirits. They were also believed to have healing properties, and it’s easy to see why; without fur to hold in body heat, they radiate more warmth than other dogs, and are effective “heating pads” on cool nights.

Around the same time Xolos showed up in civilizations, they started to appear in art throughout Mesoamerica. The sculpture and paintings of early South American cultures include representations of dogs that look like Xolos.

Because the dogs were celebrated for their healing properties and connection to the spirit world, they’re represented in sacred art such as burial icons and representations of the gods.

In the 16th century, Fray Diego Durán, documented the dog market of Acolman, State of Mexico, and reported that the dogs were used during diverse festivals as food and as sacrifice. The reports of historian Bernardino de Sahagún documented the 9-level journey of the soul in the afterlife, including the central role of the Xolo: without the Xolo, the soul would never rest in peace.

The introduction and cross-breeding of European dogs into the Americas, Christianization, and Spanish colonization eliminated and transformed indigenous habits and traditions, including the Xolo breed. For a long time, the breed was considered nearly extinct. Recent genetic research indicates that the current breed does not include much of the original DNA.

Xolos are part of 20th century art, having appeared in the life and works of artists Diego Rivera and Frida Kahlo. Rivera and Kahlo bred and raised Xolos in their shared homes. The Dolores Olmedo Museum holds many of their art works and continues to care for Xolos on its grounds.

Xolos continue to be popularized by artisans and contemporary artist in a variety of expressions, including t-shirts, jewelry, murals and photos.

In recent mythology, Xolos have been connected to the Chupacabra, a figure in Latin American folklore that preys on farm animals. Chupacabras don’t exist, but some urban legend enthusiasts believe their origins may lie in the unusual-looking hairless dog. The chupacabra legend is so pervasive that frightened farmers have mistaken Xolos for the mythological creature.

Xolos are still used as comforting healers. While modern science has debunked the idea that Xolos can cure ailments, like any dog they can offer health benefits like lower blood pressure and stress in our daily lives, and ease loneliness.

The Xolo grows more recognized each day. Due to a renewed interest and respect for indigenous and ethnic identity, social media, movies like Coco, public festivals and official recognition, it’s impossible to deny the magical qualities of a Xolo dog.

The Xoloitzcuintle is an ancient natural primitive dog with an athletic, slim and pleasing physique, expressing speed, harmony and strength without appearing coarse. Possessing a clean cut outline, it has a well-proportioned body, with ample chest, well-sprung ribs, and long limbs and tail.

There are two varieties in the breed, Coated and Hairless, both identical in conformation except for coat and dentition. 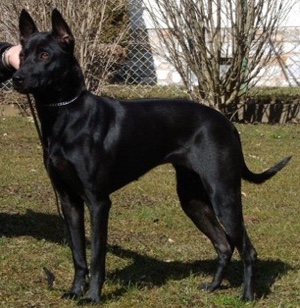 A very attractive, completely short-coated dog. Hair should be tight, flat and smooth with no undercoat. The Coated variety should have the same harmonious proportions as the Hairless variety in conformation, the dentition must be complete (42 teeth), normally developed and in a normal position. 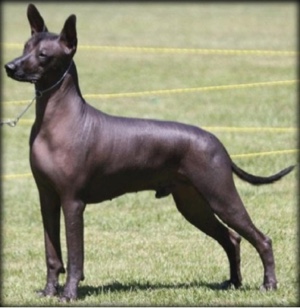 The most important characteristic is the complete or almost complete lack of any hair in the body, with a smooth and soft skin. The particular feature is that the dentition is nearly always incomplete, associated to the congenital hairless gene.

Xolos were among the first breeds recorded by the American Kennel Club (AKC). A Mexican dog named ‘Mee Too’ made breed history as the first AKC-registered Xolo in 1887. ‘Chinito Junior’, bred and owned by Valetska Radtke of New York City, became the breed’s only AKC champion to date. He earned his title on October 19, 1940. In 1959, the Xolo was dropped from the AKC stud book due to the breed’s scarcity and perceived extinction.

The Xoloitzcuintli Club of America (XCA) was founded in October 1986 to regain AKC recognition for the breed. On May 13, 2008, AKC voted to readmit the breed to its Miscellaneous Class starting January 1, 2009. The XCA is the official parent club for the breed, founded on October 26, 1986 for the purpose of regaining AKC recognition for the Xoloitzcuintli. The founding members voted unanimously to recognize all three sizes (toy, miniature and standard) and both varieties (hairless and coated) at their initial meeting.

Despite the Xolo’s more than 3000 year history in Mexico, the breed did not receive any official notice in its homeland until the 1950s. The Fédération Cynologique Internationale (FCI), founded in 1940, was not prepared to declare the Xolo an official purebred at that time. According to breed historian Norman Pelham Wright, author of The Enigma of the Xoloitzcuintli, Xolos began to turn up at Mexican dog shows in the late 1940s. While they were recognized as indigenous specimens of a native breed, interest in them was minimal at that time because information was scarce and no standard existed by which to judge them.

Within a decade the FCI realized that the breed would become extinct if drastic action were not taken to save it. This led to the widely publicized Xolo Expedition of 1954. With the official sanction of the FCI, Wright and a team of Mexican and British dog authorities set off to discover if any purebred Xolos still existed in remote areas of Mexico. Eventually ten structurally strong Xolos were found and these dogs formed the foundation of Mexico’s program to revive the breed.

A committee headed by Wright authored the first official standard for the breed; on May 1, 1956 the Xolo was finally recognized in its native land and, as Mexico is a member of the FCI, worldwide.

Federación Canófila Mexicana (FCM – Mexican Canine Federation) adheres to the FCI norms but does not accept coated Xolos without genetic proof; the coated variety is not permitted to compete.

Breed Name: XOLOITZCUINTLE
Breed Number: 234
Group: Group n°5 – Spitz and primitive types
Section: Primitive type
Date of acceptance on a definitive basis by the FCI: 11/6/1961
Official authentic language: Spanish
Date of publication of the official valid standard: 10/8/2012
Breed status: Recognized on a definitive basis
Country of origin of the breed: Mexico
Working trial: Not subject to a working trial according to the FCI breeds nomenclature
Varieties: Miniature, Intermediate, Standard
Date of publication of the standard: 1/28/2014 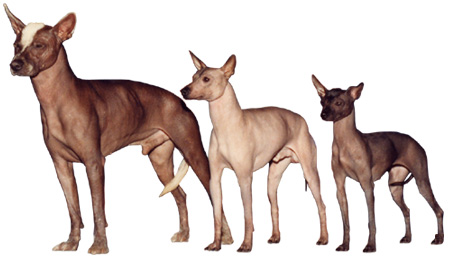 The Xolo is an ancient, natural breed, molded by evolution rather than selective breeding. A Xolo is moderate in all aspects of type and conformation, never extreme or overdone. Today the breed serves as a guard and companion. 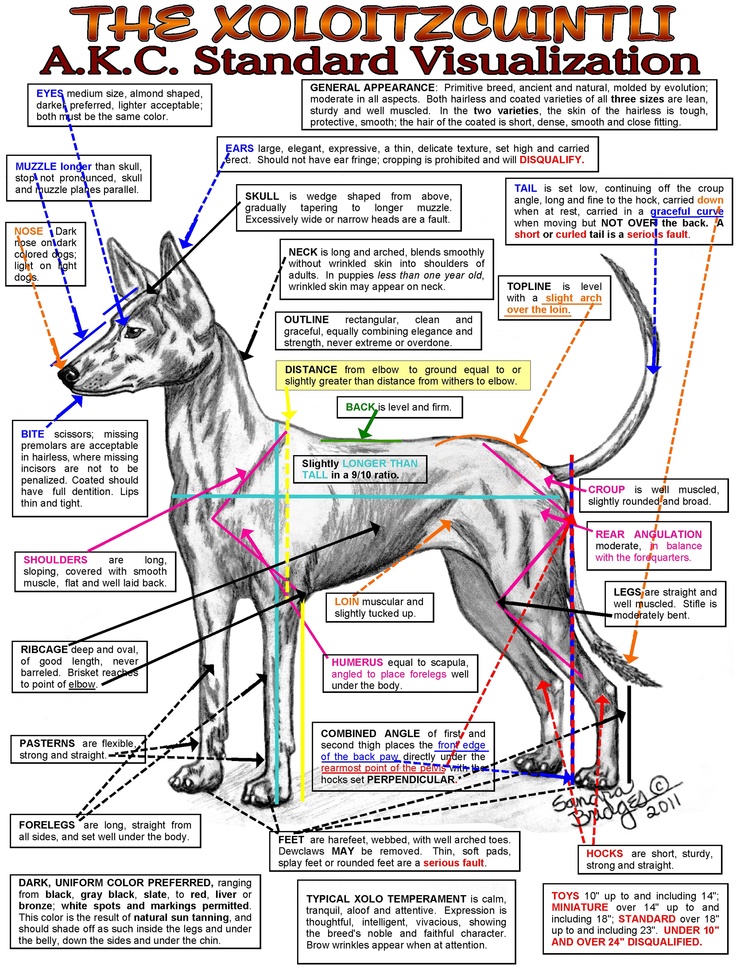 Thanks to these sites and resources for their information and continuing efforts to educate government agencies, breeders, owners and the public about the Xolo.

For the life of your Xolo. 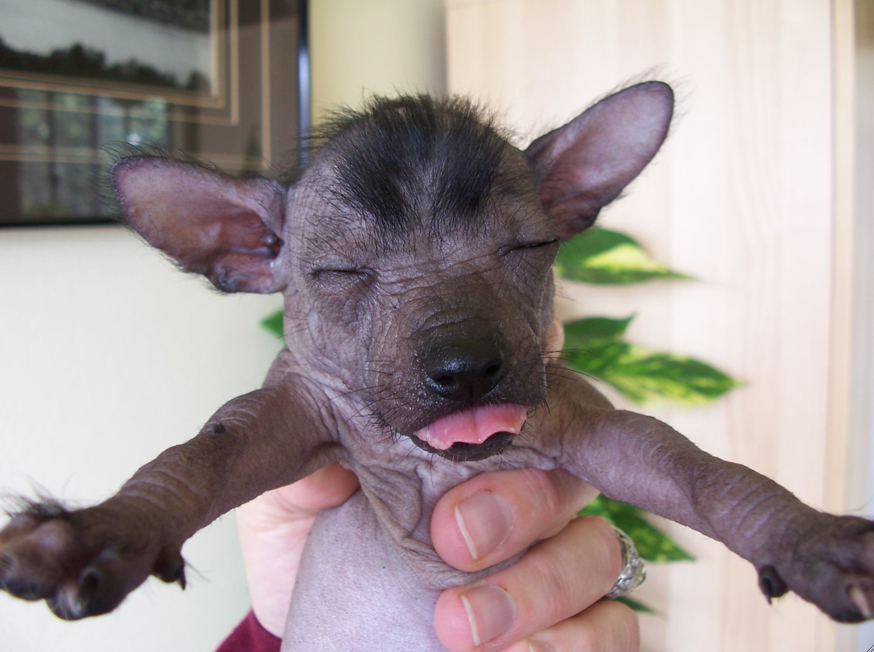 Please confirm you want to block this member.

You will no longer be able to:

Please note: This action will also remove this member from your connections and send a report to the site admin. Please allow a few minutes for this process to complete.

You have already reported this .

We use cookies to provide the best site experience.

You can find out more about which cookies we are using or switch them off in settings.

This website uses cookies to provide an optimal user experience. Cookie information is stored in your browser and performs functions such as enabling automatic login when you return to our website and analyzing which content and services are most interesting and useful.

Strictly Necessary Cookie should be enabled at all times so that we can save your preferences for cookie settings.

If you disable this cookie, we will not be able to save your preferences. This means that every time you visit this website you will need to enable or disable cookies again.